When we look at a face, the first thing we notice is the eyes and the changes around the eyes.  We gather a generalized special sensation of the geometric details and proportions of the face, but the next thing we look at are the lips and mouth.  We could postulate that this has an evolutionary benefit,  because you can really tell someone’s intentions by the expression in their eyes and by the expressive changes around the mouth.

A smile conveys friendliness and is not threatening, whereas a downturned mouth with a snarl does exactly the opposite.  And a toothless smile means an old person.  Unfortunately, over time, changes around the mouth that we have no control of begin to dominate and form our expression, not conveying the person that we actually feel like we truly are on the inside.When it’s time, one of the options at your disposal is a lip lift.

What is a lip lift?

A lip lift is a procedure done on the upper lip to shorten its length and make it fuller and more expressive.  The procedure has also been known technically has “subnasale lift” or “cheilopexy”.

Why are lip lifts popular?

Lip lifting has been around –to my knowledge –since about 1981.  Like many procedures in medicine, it may have been around for a lot longer than that —someone may have thought it up and published a crude technique, but it was not at all part of the tool box of most cosmetic and plastic surgeons.

The procedure provides an instantaneous improvement in the appearance of an aging mouth.  The procedure has been popularized on Instagram by Ben Talei on the West Coast and Gary Linkov on the East Coast, both Insta influencers in facial plastic surgery with large followings.  These docs have also published on their techniques so that they’ve become well established,  and have patients that come to them specifically for this procedure.

We have had lip lifts featured in our gallery of procedures since 2007, and are fortunate to have worked with Kevin Ende who also had a large experience with this procedure and has published on it.

What happens around the mouth with aging?

It’s important first to know what’s beautiful about a mouth—a youthful mouth.  Obviously, the teeth need to be white aligned and beautiful,  but the lips and mouth are the frame to the teeth and so they have great importance .

Youthful lips are full, with a distinct vermilion border which is defined as the intersection between the white lip and the red lip. The lower lip is bigger by .66 times than the upper lip.   The philtral columns are well defined and the Cupid’s bow is distinct and well defined.  At rest, approximately 3-4 mm of upper incisors show, and with smiling, the entire upper teeth to at least the first molar become apparent. 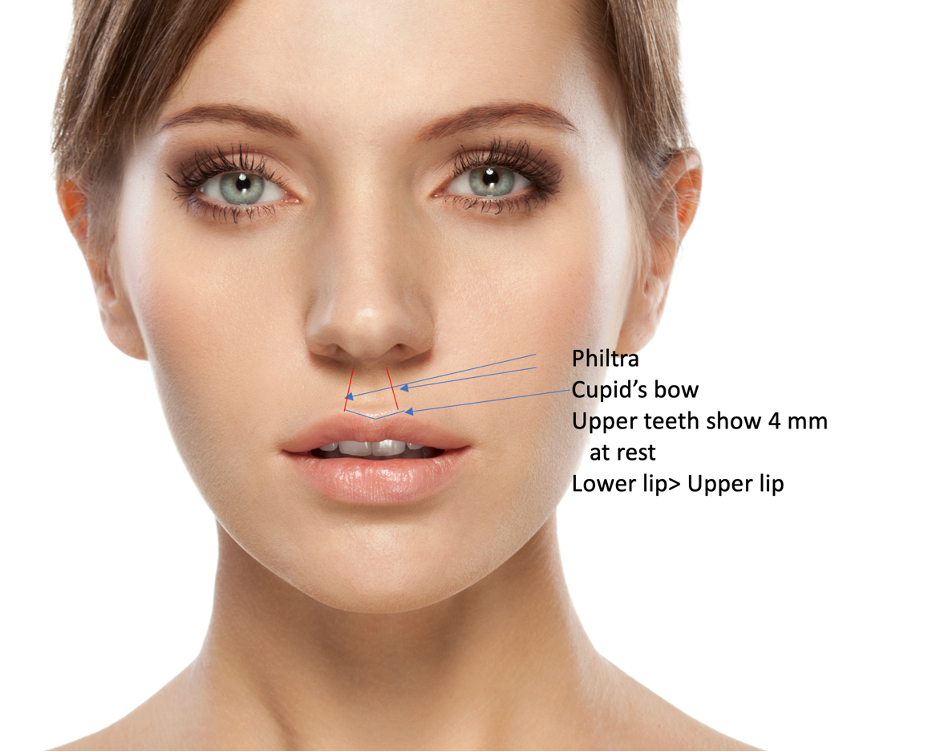 With aging, multiple changes occur that are seen in just about everyone—there is a general loss of the ability to show the upper teeth and there are changes in lip architecture and volume.  It’s harder to show your upper teeth because the entire upper lip appears to lengthen.  The lip loses its clean distinct surface anatomic elements– the tissue thins and both muscle and fat atrophy.

The ligaments that suspend the lip appear to lengthen and the entire lip lengthens.  Because of  the thinning and lengthening of muscular attachments to skin, the Cupid’s bow and the vermilion border lose their definition and flatten, and the lip can appear to turn inwards, contributing to a “toothless” appearance.

The lip itself also loses volume, and because of loss of tone of the muscle that surrounds the upper and lower lips, the orbicularis oris—the lower teeth suddenly show preferentially to the upper teeth which no longer become visible.

At the same time, the skin develops wrinkles that are vertical that are perpendicular to the axis of the muscle that surrounds the lip—so called smoker’s lines or “bar codes”. Filler injections can plump the lips and add definition to these anatomical surface landmarks that create a beautiful lip, but in many individuals the addition of more substance further lengthens the lip, making it harder to display any teeth while smiling and making the lip appear unnatural.

Is this procedure right for me?

If you’ve tried fillers and they don’t give you the benefit you are looking for, don’t appear natural, this procedure may be worth investigating.

Who should I trust to do my lip lift procedure?

The surgery is done by many cosmetic and plastic surgeons. It’s worth asking about the procedure in your doctor’s office, or asking for a referral to a surgeon that does this procedure.

How is the lip lift procedure done?

Multiple incisions have been described, all of which either involve removing skin where the base of the nose and the face meet, and putting things back together.  Some docs advocate extending the incision into the nostril, but we’ve seen that that creates a visible scar and can distort the nose, drawing the nostril downwards.

We take a long time making sure that the incisions are hidden and that the resection is balanced.

After that, you are numbed with a long acting (6 hr) injection and the procedure is performed.  There are lots of sutures involved in creating a meticulous tension-free closure.

You can be awake or asleep for the surgery.  It can be done in the office or in an ambulatory surgery center.

Initially, after the procedure, the lip appears exaggeratedly overcorrected because of swelling, and all the anatomic features we are trying to accentuate will be too apparent. You can be anxious that this will be a permanent problem:  it won’t be.  Pain is generally not a significant problem, but pain medications are prescribed.

We like you to avoid expressing yourself in the first two weeks after surgery because it puts tension on the surgical incision site.  We don’t want you pulling on your lip to look at the incisions.  We want you to be “expressionless” for two weeks: no smiling, no drinking through a straw, eat only soft foods that won’t stress the wound.  You can resume exercise at one week and makeup at two weeks.

Are there any negative side effects of a lip lift?

The biggest downside to this procedure is that you are putting a scar right in the middle of the face that can be apparent.  Fortunately, scarring is rare in this location because the scar is concealed.  In situations where redness or irregularity occur, we can laser the skin and treat with scar gels.  So far, we haven’t needed to resort to these management alternatives.

When will my sutures come out after the procedure?

Some surgeons remove sutures at 3 days.  We remove our sutures between 5 and 7 days after the procedure.

How else can aging around the mouth be treated?

Fillers, lasers, deep chemical peeling, and dermal rolling all have a use in our practice and for some patients are  preferable choices to a lip lift.   We help you design a choice that is optimal for you.If you are interested in a minimal incision approach that doesn’t involve a full-on incision under the nose, ask us about the gliding lip lift—a procedure that repositions the skin that has sagged from the underlying tissues without actually cutting it away. To find out more about this, review our gallery of Lip Lift Before & After pictures such as the one shown below.

I want to get a lip lift, where do I begin?

Dr.Allan Wulc is a quadruple certified plastic and cosmetic surgeon with 25+ years of experience and would be pleased to help you achieve your aesthetic goals. Fill out the form below to schedule a personalized consultation or call (610) 828- 8880.